Join Us - Become a Member!

Like what you see? We need members! - the more people we have, the more impact we have when we try to raise awareness of circadian disorders with other organizations, the press, the medical community, and the public. Together we have a voice! Join now!

Circadian Sleep Disorders Network has launched its PATIENT POWERED REGISTRY AND SURVEY for people with Circadian Rhythm Sleep Disorders. The registry is open to anyone with a circadian rhythm sleep disorder from any country. You can sign up for the registry and take the survey (it's free) at CircadianSleepDisorders.org/registry.

By collecting information from a large number of people actually suffering from these disorders, we can stimulate research into causes, treatments, and effects of circadian disorders.

The information you provide can jump-start research on some of the questions we've been asking about for years - but only if enough people participate. Sign up now (free), and please take the survey.

Brochures and Other Handouts

Our brochure is geared to the general public, to introduce DSPD (DSPS) and Non-24 to people experiencing symptoms of these disorders, and to their families. Please distribute it to anyone who may be interested. Print on lightly colored paper for some color, if you like. We used ivory.

The web display version shows the brochure panels in easy-to-read order. The print versions are meant to be printed out on both sides of a sheet of paper, then folded in thirds, creating a brochure. (In the print version, the panels will appear out of order on-screen.)

We have posted documents describing DSPD (DSPS) and Non-24, in an easy to read Question-and-Answer format. These are designed to give to family members, friends, employers, and school personnel, to help them understand these disorders. Feel free to print and distribute these. There are two different (but similar) versions, one for DSPD and the other for Non-24:

The web formats display nicely in your browser. The printer versions are formatted by your browser for printing a multi-page document. The booklet forms are pre-formatted PDF files that you can print on two sides of a single sheet of paper, which then folds in half into a booklet.
* When printing the booklet, be sure to flip on the short edge (select this option if you have a double-sided printer).

We also have a one page Basic Fact Sheet that introduces DSPD and Non-24 to people who don't know about them. It's a quick and easy read, just the basics. 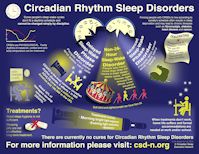 Former board member and artist Lily Style has created an infographic describing Circadian Rhythm Sleep Disorders. View it in your browser at www.circadiansleepdisorders.org/docs/CRSDGraphic.php. Feel free to repost the graphic to help raise awareness.

You can print it directly from your browser (we suggest making the browser window full screen - the image will resize). We are also posting JPG images in various proportions for printing directly on different sizes of paper:

This is a free mailing list support group for people with DSPS and Non-24 to share their experiences. It's a good place for people just discovering these disorders to hear how others deal with them, as well as for long-time participants to get support and to provide support to others. There are often discussions of evolving treatment, useful to all. For further information, and to sign up, go to www.circadiandisorders.org/list.

Note that membership in Circadian Sleep Disorders Network and membership on this email list are completely separate.

Circadian Sleep Disorders Network is affiliated with this email list, and our volunteers assist the list administrator with some chores. CSD-N was formed by participants on this list, and many of our members post regularly. But we have no control over what appears or who can join, and list membership is completely separate from membership in CSD-N.

Once you've signed up for the list, you post by sending an email to Everyone on the mailing list receives that post as an email, and you receive everyone else's posts as emails. If you don't like to get separate emails, you can opt to receive in digest form, typically one email a day containing all the day's posts. You make that selection after signing up by logging in (using the password you created when signing up for the email list) at www.circadiandisorders.org/list.

There are some rules:
The rules that the list software enforces are

Of course, don't be snippy or insulting, and please take off-topic conversations off-list. And no advertising.

There is also a mirror of the archive on Yahoo at https://groups.yahoo.com/neo/groups/nite-owl/info. This is useful when the primary archives are not working, as sometimes happens. Login to your Yahoo account, or create one (free) - link is at the top right on that page. Then you have to join the Yahoo copy of the list - this is separate from signing up for the list itself - there is a button on the Yahoo page to do this.

If you do not know your list password, send email to
niteowl-request@lists.circadiandisorders.org
with PASSWORD in the subject line. This email must come from the same email address that you subscribed from (which is the one your incoming Niteowl list emails go to). Your password will be sent to you at that address.

If that doesn't work, you can unsubscribe by sending email to
niteowl-request@lists.circadiandisorders.org
with UNSUBSCRIBE in the subject line. This email must come from the same email address that you subscribed from (which is the one you your incoming Niteowl list emails go to). If you do this, you will get an email back asking you to confirm. You must follow the instructions and confirm, or you will not be unsubscribed.

For more (or more current) help on list commands, send email to
niteowl-request@lists.circadiandisorders.org
with HELP in the subject line.

Links to Other Pages and Other Sites

Circadian Sleep Disorders Network does not necessarily agree with the content on other sites that we link to.

Some links have been moved to other pages, where they seem to belong. For example, treatment related links are on the Treatments page. If you don't see something here, please look further, or use the Search box above.

For a list of recently added references (since the last newsletter), see Recently Added References (members only).

Circadian Sleep Disorders
(including both DSPS and Non-24)

See also separate sections below for DSPS and for Non-24

Articles Focusing on Adolescents or Children

and a Book on the Subject:

Treatment of DSPS and Non-24

These stories are in the words of the people submitting them. We do not verify the information they contain, and do not judge their applicability to others. What works for some may not work for others.

Special Topics of Interest, by Our Members

Talks, Papers, and Meetings on Behalf of CSD-N

Several members have contributed letters which they or their doctors have written in support of accommodation for CRSDs. We include them here in case they can be of use to others. Names have been changed or removed. They are provided as guidance, but will generally have to be rewritten to suit your individual circumstances.

You must be a member of Circadian Sleep Disorders Network to access these.
You may join here.

For Monitoring or Charting Your Sleep at Home

Most of these devices track wrist movement and infer sleep/wake from that. They are likely not very accurate for many individuals. In some case the accuracy quoted refers to the accuracy of movement detection, not of sleep detection. At best they do not directly detect sleep stages but only infer them from motion or heart rate.

We have not used or evaluated these devices.

College-specific references are in the next section


School - College and Beyond

You can find Non-24 here (DSPS is not rare enough)

Circadian Rhythm Involvement in Other Disorders

see also under Adverse Effects above


The following are not specific to circadian disorders, but to sleep deficit generally


Alzheimer's Disease and Other Dementias


The following are not specific to circadian disorders, but to sleep deficit generally

The following is not specific to circadian disorders, but to sleep deficit generally

See also under Circadian Rhythm Involvement in Other Disorders above

For information about melatonin, please see Melatonin on our Treatments page.

the following are old, and will be relocated or deleted in time

We have asked other sleep- and health-related web sites to add a link to the CSD-N website, so interested people could learn more about circadian sleep disorders. That also helps our search ranking, making it easier for others to find us. Sites which have linked to us include:

In addition, circadiandisorders.org, which was no longer being maintained, now forwards their traffic to us.

You can help: email other websites with a request to link to Circadian Sleep Disorders Network at www.CircadianSleepDisorders.org. Please use this primary address when suggesting links, not the shortcut.